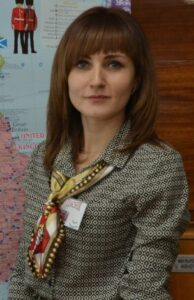 Objective: To expand the geographic pupil’s  knowledge of through knowledge of the history of European languages, customs and traditions of Great Britain, deepening interest to the English language, the culture of the country whose language is study, practice to create multimedia presentations, development of creative pupil’s abilities.

The course of education activity:

Pupil 1. Good day, dear teachers, pupils and all, who presents in this hall!!

Pupil 1. We are glad to meet you, esteemed company!

Pupil 2. It has become a long – standing tradition to hold thematic educational activities, the main aims of which – improving knowledge of the history of European countries, especially the customs, traditions, cultural heritage of nations, understanding of the necessity of learning foreign languages, because our place – in the European Union, and, of course, our aim: Ukraine – into United Europe, that’s why the language understanding is very necessary.

That’s why, the theme of our today’s educational event: “The people – like their culture…We should to be understanding for Europe and Europe – for us!!!”

Travelling around the Europe, we all together to plunge into the beauty and richness of different languages, traditions, customs, spirituality and people’s  culture.

Pupil 2. So, the place of our today’s visit – The United Kingdom of Great Britain and Northern Ireland.

The Germans living in Germany,

The Romans – in Rome,

The Turks living in Turkey,

And the British – at home!

Indeed, they live at home, on their island, inaccessible and proud, that noticed many years ago a well-known William Shakespeare.

This royal throne of kings, this sceptered isle,

This earth of majesty, this seat of Mars,

This other Eden, demi-paradise,

This fortress, built by Nature for herself

Against infection and the hand of war,

This happy breed of men, this little world,

This precious stone set in the silver sea,

This serves it in the office of a wall,

Or as a moat defense end to a house,

Against the envy of less happier lands,

This blessed plot, this earth, and this realm.

George – Good day, dear ladies and gentlemen. My name is George. I am waiting for my friends. Hey, what’s up? You don’t understand English? Ok, I can speak Ukrainian…

Hello, I am one of the heroes of well – known British writer Jerome Jerome Klapkiv “Three in a boat, not counting the dog …”

Harris – Hello, my friend! I haven’t seen you for ages. How are you?

George – Hello, dear Harris. I am fine, thanks, but… let’s speak in Ukrainian, as not all understand us and our native English here.

Harris – Well, let me introduce myself, my name is Harris Herschel. I’m the hero of the novel Jerome Klapkiv Jerome “Three Men in a Boat not counting the dog”

Do you know who is the Jerome Klapkiv Jerome ?

George – Yes, yes, they know. Where is our third friend – Benjamin?

Harris – So, he hastens to us. (looking out)

Benjamin – How do you do, my friends! (takes a hat)

Harris – Well, all friends are together already, so we can have a cup of tea and discuss our business. Benjamin – Well, and what is about your health?

George – You know…. Really bad … I recently read only one book  Medical Handbook, which describes the symptoms of all diseases.

Benjamin – No, George, it’s not true, you’re wrong…This can’t be… You’re not too old and sick, that you think so.

George – And you give it to try.

Benjamin – (taking a book, reading and commenting about yourself)

Listen to me…I known… I have the “influenza”…

Harris – All is well-known! We need (a rest) a vacation!

Benjamin – But if you can help and choose a vacation for me, as I can die with my “influenza”.

George – Don’t worry, dear Benjamin. Now we are taking a map and choosing our route.

Harris – I think that we need to start our travelling from my native Scotland. Mountains, valleys, traditional Scottish games of High Mountains, the legends of King “Brave Heart”.

Benjamin – Hey-hey, but why don’t we to start our trip from my magic Wales. Singing of my countrymen – the Welsh, as to enchant a lot , many castles and fortresses shrouded in mystery and call to yourself .

George – Gentlemen, my England deserve to start the trip from here. I will not even try to praise it.

The British have one very interesting saying: “My house is my castle”, because for them “Their house – their fortress” really.

Although there are different comments about their character, but we can say with a sure about their “island pride or deep patriotism”.

This is a well disciplined and cultured nation. By the way, all we know, that, porridge, pudding, lunch and tea, football, Shakespeare, Newton, “Beatles”, Lady Di – this is all about the country of unshakable traditions and modern views on life.

The Scots is considered as good, although are not very friendly at first nation. They don’t like to compromise and largely rely on logic, but often fall into extremes.

They are more extravagant and their traditions more colorful and interesting. Gaelic language and songs, fabric “tartan”, bagpipes etc… – all this is Scottish!

There isn’t other part of the British Isles, where the national spirit is stronger and the national pride is greater and where national traditions are so respected as in the Wales. Also we know that the “Welsh” still proudly wearing traditional costumes.

And religion – the main difference between the Irish and the British, while common for all nationalities there is love for animals and gardening, without which they can’t imagine their life.

“The most convenient time for conquering England  –  fifth hour of noon.  As, at this time the British are very busy with their “a nice cup of tea with milk”

“If you want to see English language – look around yourself” – the British joke about their habits in such way … “Excuse me? Are you stupid or are you no Englishman?”…

Specificity of English humor is well-known, and a humor is their national trait which is scared and nervous a lot of foreigners. But there is not country which can well laugh at themselves, as in England.

Once upon met the Englishman, the Frenchman and the Ukrainian.

– We have a difficult pronunciation. We say “Enough” and write “E-n-o-u-g-h”.

A very famous adventurer Sherlock Holmes and his friend Doctor Watson revealed a lot of interesting and dangerous crimes: the history of Professor Moriarty, “Hound of the Baskervilles”, “Treasures of Agra” ….

So, we also didn’t remain indifferent and try to represent them to you in our lyceum.

So for your attention the Scenes “Sherlock Holmes and Dr. Watson represent…”

I do not know an answer on the one question: “How do I write about these things?” How do you guessed, Holmes, which will be some test in English?

Watson. I don’t understand why is this vocabulary dictation?

Holmes. Elementary, my dear Watson. This is a set of words that is dictated …

Watson. Aah … Our “teacher” Betty  – don’t miss …but  now we are seeing something interesting….

Holmes. Here’s another oddity: yesterday on the 6th class our dear Betty dictated texts so quickly, that’s “poor Lisa” almost had been fainted.  Inconsolable, “she was stood at her chair”.

Watson. I do not understand, what is this surprising?

Betty.  Good morning, children. Where are all pupils? Why are they absent today?

Holmes. Now they would be.

Betty. Why they absent today? I don`t understand, what`s happening
(Coming girls, hurrying and apologizing: “excuse me , please…, I am sorry…may I sit down!!!”)
Betty: Quickly, quickly..!! Sit down!!!
Let`s begin the dictation. First sentence……

In the 19th century millions of Europeans emigrated to the USA because they wanted to find a better life……..

(Holmes looks in the Watson’s notebook, then suddenly pulls out a long cheat sheet…)

Betty.  What is? This is horrible! Give me it! Now!

Holmes. I am at your service, Miss Teacher!

Betty.  You are very lazy! Go to the map and give me the answer: “Where is England situated”
Holmes. (Trying to ask somebody about answer, but very quietly) “On the island of Great Britain, along with Scotland and Wales”

Betty. “And what’s about  the population?”

Holmes. “England is part of the United Kingdom, under the leadership of QUEEN”

The form of the government of the United Kingdom is a parliamentary monarchy without any formal constitution, but with old customs and traditions.

The national emblem of Britain is a red rose – the emblem of England; the thistle – Scotland, leeks – Wales….

Fans of mysteries and puzzles can touch to the tallest building on the earth and fill some comic’s energy.

Geographers will appreciate the natural wealth of the country.

And, the historians will be happy to get acquainted with places, where there was the Industrial Revolution.

Each country has something beautiful that’s call “worthless”. The same we can say about Britain. As this is London (Tower) Bridge – (half hanging, half lifting), whose length reaches 269 meters.

Tower of London – one of the greatest attractions of England, which attracts thousands of tourists. It was the first building of the Tower of London, where lived the first kings. There were even times when the Tower served as a prison, a zoo, a mint and an arsenal. But now it’s a great “Museum of the royal jewels” – perhaps, the most popular museum of London. And, of course, here you can see the crown of kings and queens of Britain, their jewelry and other valuables…

There is also an ancient tradition, which is “so – called” the “gate closing ceremony”.

The “Ceremony of the Keys” is famous during the last 700 years. Every day at 21.53 a custodian of keys, dressed in the clothes of the Tudor dynasty, proceeds from tower Bayed. Towards him – the Privacy of keys, dressed in a form of Beefeaters. This action can’t be expressed by words … It must be seen by everybody…

The British – the most conservative in the world and they don’t want and to change their habits, lifestyle, food or clothing …

For example, even the Queen Elizabeth II didn’t change her hairstyle for 50 years; Prince Charles prefers gray suits; Princess Anne – fans of salmon dishes, which she can eat even three times a day.

So, for many years Elizabeth II with her husband and family has already living in London- “the heart of Great Britain”.

(The video “A royal wedding (coronation)”

British staged their own prosperous life … But the fate of English poets was no less hard than in Russian Lermontov, Ukrainian Shevchenko or Spaniard Cervantes…

One of the greatest poets of Britain was George Gordon Byron, who was in charge of their lives for the freedom of Greece.

It is not impossible to mention the immortal author, classics of English literature, William Shakespeare and his famous theatre “Globe”.

All of London can be seen only from one place – “London’s Eye”, because it’s the largest in Europe “Ferris wheel”. From the height of 135 meters we can see almost all beauty of the city…

You can talk a lot about the Britain, but everyone will find something own for the soul, something beautiful for yourself there… And all we know, that the Britain can capture and interest everybody…

Today we all together have seen the extraordinary beauty and majesty of the UK, the immutability of their customs and traditions and a great passionate love to native country.

This is a good example for us, Ukrainians.

And of course, we must be mindful of our own customs and traditions, and, of course, about our motherland – Ukraine – “our fortress”, which we should love and cherish, as the British…

Every beginning has own ending…That’s why, our educational event is also completed. Thank you for attention! 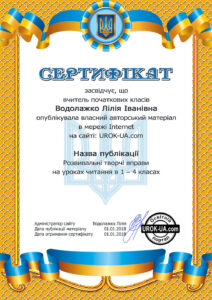 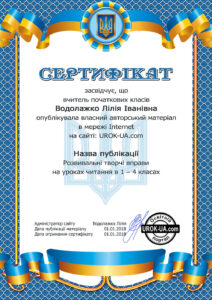 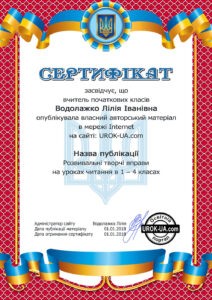