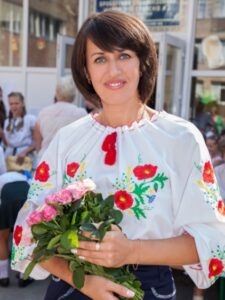 T: Good morning children, glad to see you. Are you ready to start? What are your hobbies?

T: So the topic of our lesson deals with one of the most popular arts nowadays- music. We’ll find out interesting facts about great musicians, watch their performance.  In course of our lesson we’ll revise some words and expressions you will need for discussion and speaking. We will also practice reading, listerning. Music is a large part of our lives.

Discussion.  In pairs, talk about the music you like. You should say:

3 She sat down at the piano, played the  first three ____ of the song and suddenly stopped.

4 It must be difficult being a ____and responsible  for a whole orchestra.

5 I someone’s got absolute ____, they can name a single note on hearing it, or sing any

note without the help of an instrument.

T: The world of music is marvelous and appealing. How many musical instruments do you know? Let’s watch a presentation and listen to their sound. (Watching a presentation)

T: So there are many different kinds of musical instruments and tastes are differ. But today we’ll talk about professional concert pianists. Your task was to find out about some of them

–  How do musicians’ life differ from ours?

–  Have they got special day’s routine? We are going to find out the answers to these questions.

Listen to seven answers from an interview about the lives of concert pianists. Match them with the questions (a-h).

A What sort of workloads do they have?

B What does it take to be successful?

D Do concert pianists get nervous before concerts?

E How many of them actually become successful?

F What’s it like preparing to perform a new piece?

G What are the lives of young pianists like?

– Were you surprised by any of the information?

Listen to the full interview. Make notes according to the questions mentioned before.

Work in pairs. Take turns to use your notes to tell your partner about concert pianists.

Thank you for your active participation in this lesson.

Your home task is to make a project about your favourite Ukrainian group or singer.

Most people like music, but some love it. Musicians want to create their own music.  When someone becomes a musician they learn many things, that non-musicians would never know. Not everyone has the drive to be a musician.
When someone is a musician, they have a different social life than people who are not. Musicians go to a lot of music clubs and concerts. Musicians also love to talk to other musicians about the newest instruments, brands, technology and ideas they have.
Musicians  create their own music. Musicians express their feelings  in their music. They spend countless hours perfecting their instrument, so they can sound well on stage.
Today’s Musician does many things that you normally would not learn.  Whether it’s practicing alone, playing on stage, listening to music everywhere, or talking to friends about music.